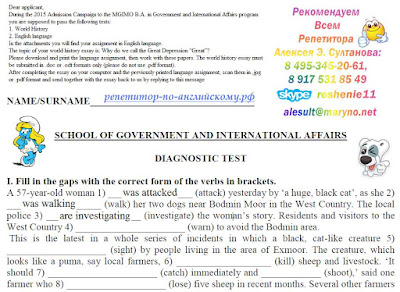 During the 2015 Admission Campaign to the MGIMO B.A. in Government and International Affairs program you are supposed to pass the following tests:
1. World History
2. English language

In the attachments you will find your assignment in English language.
The topic of your world history essay is: Why do we call the Great Depression “Great”?

Please download and print the language assignment, then work with these papers.
The world history essay must be submitted in .doc or .odt formats only (please do not use .pdf format).
After completing the essay on your computer and the previously printed language assignment, scan them in ,jpg or .pdf format and send together with the essay back to us by replying to this message. In the topic of your message, please indicate your surname and assignment name
(i.e. 'Smith John - English language' or 'Smith John - World history'). 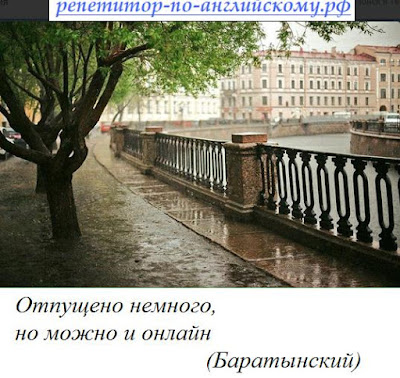 
А говорить начинают на первых же занятиях даже те, кто английский не изучал.
Текст с заполненными пропусками:
A 57-year-old woman was attacked yesterday, by what she claims was a ‘huge, black cat’, as she was walking her two dogs near Bodmin Moor in the West Country. Local police are investigating her story, which follows a large number of similar reports in the area in recent months. Residents and visitors have been warned to avoid the Bodmin area. Mrs Williams, the wife of a local farmer, described the cat ‘as just something out of the jungle. It was black all over with short legs but very strong’. More details were not available, as the creature moved too fast and Mrs Williams only managed to catch a glimpse of it. The incident occurred when Mrs Williams was taking her dog for a walk . Suddenly something hit her very hard on the back of the head, causing her to fall to the ground, stunned. ‘When I came to, there it was- huge, black cat staring down at me with its glittering eyes. I got the fright of my life, I can tell you’, said Mrs Williams.‘It was a terrifying experience’, she told the reporters, still visibly shaken. ‘ If it hadn’t been for my Labrador, who chased the monster away, it would have killed me.

It was about six foot long, the size of a large Alsacian.’ Mrs Williams’ description matches that of other eye witnesses in incidents involving strange creatures in various parts of the country. Exmoor, however, seems to be one of the mysterious monster’s favourite haunts. This is the latest in a whole series of incidents in which a black, cat-like creature, has been sighted by people living in the area of Exmoor. The creature, which looks like a puma say local farmers, has been killing sheep and other livestock. ‘It should be caught immediately and shot’, said one farmer who has lost five sheep in recent months. Several other farmers have reported the loss of Mysterious Monsters livestock following attacks by an unidentified creature, assumed by many until recent to have been a wolf. ‘A wolf has not been sighted in these areas in living memory’, commented one farmer. Exmoor police have been trying to track the ‘Beast of Bodmin”’, as it’s called, since it was first spotted some years ago, but they have so far come up with nothing except for a few very large animal tracks and a trail of dead sheep. Claims the creature was sighted in a school playground recently are being investigated. Investigations have been intensified and local police have brought in zoologists to assist them in the hunt for the Beast of Bodmin. Meanwhile, local people and visitors to the area have been warned not to walk alone on the moor. Parents have been advised to keep their children at a safe distance from the area . Motorists have also been asked to keep an eye out for anything suspicious and to report sightings to the police immediately. Grammar 1. Find examples of passive verbs in the text.

Follow by Email your English tutor's messages and classes online

Translate into English if you know the language better than Russian